The Choir Books from which these initials came were illuminated between 1370 and 1506 by successive generations of artists. They were made at the Camaldolese monastery of Santa Maria degli Angeli, the leading intellectual and artistic centre in Florence c. 1400. Its scriptorium produced sumptuous manuscripts for religious houses in Tuscany and the Veneto as well as for its own community. The Camaldolese monks sang out of these Choir Books while celebrating religious feasts. The volumes, mutilated during the Napoleonic invasion of Italy (1797-1809), are still in Florence (Biblioteca Laurenziana, Corali 1-19). The initials, which were excised from them and sold on the art market, are now dispersed in public and private collections across the globe. These four initials graced the pages of the earliest volumes, produced from 1370 onwards.

Learn more about these initials by exploring the sections below or selecting one of the images on the right. Discover further details by choosing any of the images, where you can view the hotspots by clicking on

The initials depicting the Presentation in the Temple and St Clement are among the earliest works of Don Silvestro dei Gherarducci, dating to the 1370s. By the 1390s, he was the most distinguished Florentine illuminator and after his death in 1399, his right hand was venerated as a relic. The other two initials have been attributed to various artists.

The Choir Books to which three (and perhaps all four) of these initials belonged were made for the use of the Camaldolese monks at Santa Maria degli Angeli between 1370 and c.1450.

The historiated initials marked the start of texts chanted by the Camaldolese monks at religious feasts throughout the year. They came from two types of Choir Books, Graduals and Antiphoners, which contained the sung parts of the Mass and the Office respectively. The letters belonged to the opening word of the text sung on each feast – the Introit to the Mass in Graduals and the responsory or antiphon for the relevant office in Antiphoners.

The range of pigments used to paint these four initials is remarkably similar. Some differences can, however, be observed, as may be expected for works painted over four decades. The common pigments include carbon black, lead white (used on its own and mixed with other pigments to modify their hue), vermilion, red lead, ultramarine blue, organic pinks and mosaic gold. Green hues were obtained by mixing azurite blue with two different yellow pigments. Gold leaf was laid over a ground containing gypsum and a red bole, and burnished to a high shine. Egg yolk was used as a binder in some areas of each initial.

Detail of St Clement’s white robe under magnification (60x). Numerous blue particles can be seen and identified as ultramarine by a small peak at 539 cm<sup>-1</sup> in the Raman spectrum (below). The more intense peak at 1050 cmcm<sup>-1</sup> is characteristic of lead white. 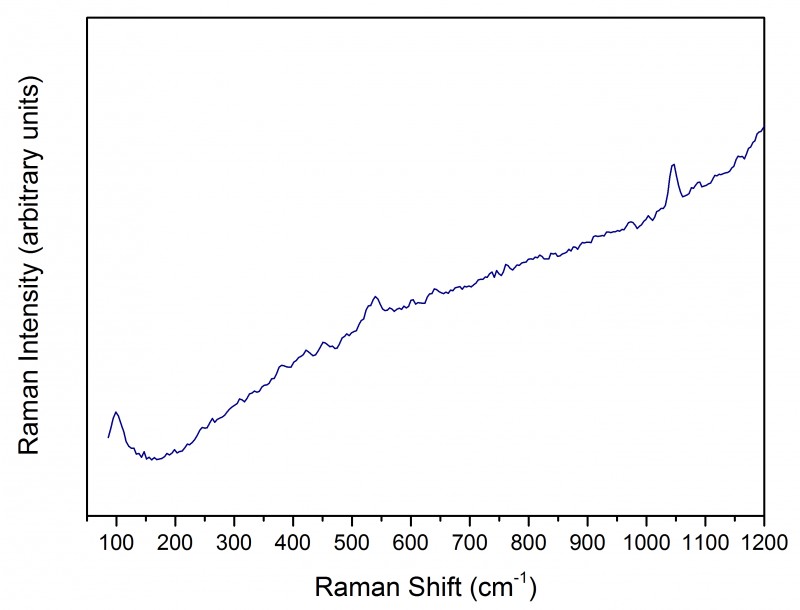 The initial D opened the Mass for St Clement’s feast (23 November) in Corale 2, a Gradual made in 1370-1375 and illuminated by Don Silvestro dei Gherarducci. The individualised physiognomy, emulating the facial types of Simone Martini and paralleled in works by his followers, demonstrates Don Silvestro’s familiarity with Sienese painting.

Typically Florentine, however, is the use of a mixture of blue and yellow to obtain green, while in Siena artists favoured the green copper mineral malachite. Here, azurite blue was probably mixed with a lead oxide yellow (hotspot 1). This same pigment was also used in the yellow highlights over the green leaves and in the book held by the Saint. The yellow initial, however, was painted with lead-tin yellow, as can be seen by selecting the elemental map for tin (Sn, layer ‘elemental map Sn’). The same map also shows that a small section of the blue mantle’s gilded border was painted with mosaic gold (tin sulphide), perhaps as an afterthought. Mosaic gold was also used for the small yellow dots which decorate the mantle, and for the shiny ornaments and leaf outlined in a dark red iron oxide pigment (Fe, layer ‘elemental map Fe’).

The pink leaves and the yellow initial, as well as the white highlights over the orange leaves and ornaments, have darkened significantly (hotspot 2). This is most likely linked to the presence of lead white. In the pink and yellow areas the discoloration appears to have started not on the surface but rather in the lower portion of the paint layers. If this is indeed the case, the degradation process may have been catalysed by the materials used to glue the fragment to its modern cardboard support.

Microscope images acquired in raking light provide evidence of the previous existence on the front side of the image of a brown cardboard mat, stamped with flowers and other decorative elements, similar to the one still visible around the Presentation in the Temple. The impressions left by these flowers are still visible especially along the lower edge of the fragment (hotspots 3 and 4).