The dainty, swaying figures, sweet faces, fashionable coiffure and elegantly draped garments exemplify the courtly art that flourished in aristocratic circles on both sides of the Channel. There is a growing interest in spatial depth, volume, texture, human emotions, and the anatomically accurate rendering of the human body. The bas-de-page scenes included on every page of the manuscript display the earthy humour considered a hallmark of East Anglian illumination.

Two main artists, working with at least one assistant, painted the entire Psalter: the Macclesfield Master and the Anointing Master.

The manuscript was commissioned for the young man who is depicted at the opening of the Confession prayer (fol. 246r). A partially erased 15th-century ownership inscription by a nun, Sister Barbara, is visible under UV light (fols. 1r, 8v). Later owners include Anthony Watson, Bishop of Chichester (1596-1605), John Smeaton, and the Earls of Macclesfield of Shirburn Castle, Oxfordshire. The Psalter was purchased at Sotheby’s, London, 22 June 2004, lot 587 by the J. Paul Getty Museum, Los Angeles, but was stopped from export by the Minister of Culture on the recommendation of the Waverley Committee. It was purchased by the Fitzwilliam Museum in 2005.

The manuscript contains the book of Psalms (150 Old Testament poems), prefaced by a Calendar and a prayer. Originally, historiated initials would have marked all of the ten major Psalm divisions, but the initials for Psalms 68, 80 and 101 are lost. The Psalter text is followed by the standard set of ten Canticles, the Te Deum hymn, the Athanasian Creed, the Litany and the Office of the Dead. Most texts are conventional, apart from the Confession prayer, which is not found in other Psalters made by the same craftsmen, and is unusually detailed. The texts are framed by full or partial bar borders on burnished gold grounds. These are richly decorated with spirals of leafy vines, birds and animals, knotwork, naked figures, and fanciful creatures, especially hybrids. Medallions with 'portrait' busts and profiles are incorporated in several borders, and similar heads appear in some ornamental initials. The lower margins of almost every page feature inventive figures and scenes. The sources of these pictorial parodies, absurdities and obscenities were both verbal and visual. They range from exempla, or anecdotes used by preachers to enliven their sermons, to religious plays, secular romances, and fables that entertained courtly audiences and townsfolk alike.

The extensive decoration of this manuscript was obtained with a very homogeneous palette, which includes carbon black, lead white, red lead, azurite blue and verdigris. Organic colourants provided a range of purple, tan and pink hues. Mosaic gold was used in the majority of yellow areas, although some details such as the figures’ hair probably contain a light-coloured yellow dye.

Lightbox: 50
1
Detail of St Andrew’s tunic under magnification (16x), where diagonal lines of underdrawing can be seen under the orange paint layer. The lower hem is outlined in black and decorated in lead white with a pattern of thin lines and circles. The FORS spectrum (below) identifies the orange pigment as red lead (transition edge at 564 nm).
Lightbox: 51
2
Detail of the purple mantle under magnification (60x), showing the colour gradation from white to dark purple and the typical craquelure of organic dyes. The FORS spectrum (below) shows reflectance minima at c. 550 and 584 nm, suggesting the presence of a purple dye, likely extracted from a lichen.
Lightbox: 52
3
Detail of the inner lining of St Andrew’s mantle under magnification (60x), showing the alternating stripes of green and shiny yellow which contribute to the modelling. The elements observed in the XRF spectrum (bellow) allow the identification of these materials as verdigris (which contains copper, Cu) and mosaic gold (which contains tin, Sn and sulphur, S). 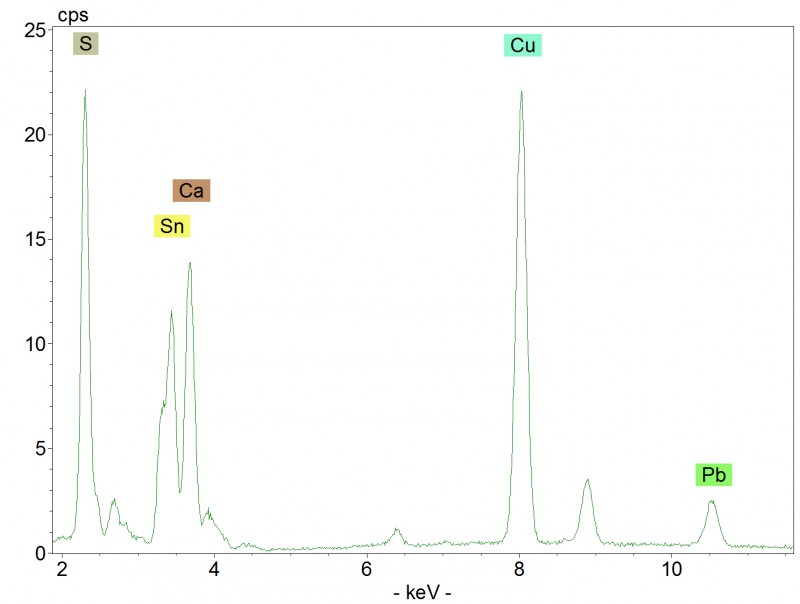 St Andrew, the first apostle to follow Christ, was venerated throughout Christendom. He is shown holding a small book and a saltire cross, the symbol of his martyrdom. His pose is similar to that of St Edmund who is depicted on the previous page, but Andrew’s face is contorted with anguish and sorrow, unlike the serene countenance of St Edmund, the East Anglian king.

St Andrew’s plain orange tunic is painted with red lead, and simple decorations at the hem contain lead white. Thick underdrawing lines are visible through the paint layer in some areas (hotspot 1). The saint’s purple mantle, however, conveys a more three-dimensional effect, obtained with a gradation of colour. The hue, which was favoured by English artists of the first half of the 14th century, was obtained from an organic dye, likely extracted from a lichen, such as orchil (hotspot 2). The inner folds of the mantle are skilfully modelled with alternating stripes of mosaic gold and verdigris (hotspot 3), in a pattern which appears in contemporary English and French manuscripts.