Gimcrack with John Pratt up on Newmarket Heath

'Tis said that naught so much the temper rubs, / Of that ingenious artist Mr Stubbs / As calling him a horse-painter.

Thomas Gainsborough, Joshua Reynolds and William Hogarth all prospered as – amongst other things – portraitists of the men, women and children of eighteenth-century England. George Stubbs, the fourth name often cited as one of the greats of this Golden Age of British painting, will for ever be associated with his pictures of horses – animals of great importance to the men who commissioned art in the period. The verse quoted above by the satirist 'Peter Pindar' (pseudonym of John Wolcott), suggests that the artist himself did not wholly appreciate the association. Yet from childhood he had been involved with the animals that were to bring him lasting fame.

Stubbs' father was a leather dealer and currier – a treater of animal hides – and the young George was exposed to the carcasses of horses from an early age. This background gave him the interest in anatomy which led him in the mid-1750s to spend several months in the Lincolnshire village of Horkstow, dissecting horses and recording the precise structure of their bodies: the tissues and veins, muscles and skeletons. The fruits of this research were published in 1766 as The Anatomy of the Horse, with plates engraved by Stubbs. The prints, left and right, are two of a set of eighteen that Stubbs designed to illustrate this definitive work [P.36 + 38-1998].

In Gimcrack, a thoroughbred racehorse and his rider stand out against a broad East Anglian sky, a sky that occupies well over two thirds of the canvas. Stubbs' treatment of the clouds here is particularly brilliant, and it anticipates the work of another Suffolk artist, John Constable.

The flatness of the surrounding ground is broken only by a clump of trees and a building on the horizon. This is Newmarket Heath, where kings had exercised their horses since at least the time of Henry VIII (1509–47), and which in the eighteenth century was becoming the most important centre for horseracing in Britain. The building outside which the horse stands is a rubbing-down house, where the animals, sweaty after their exercise, would be dried with straw. An eighteenth-century structure very like it still exists on Newmarket Heath today.

Stubbs conveys a close relationship between horse and rider. John Pratt sits calmly and correctly in his saddle, his back perfectly straight, his hands steadily gripping the reins. Pratt, who wears the colours of the horse's owner, William Wildman, was a leading jockey of the time, who once rode eleven races in a single day at Newmarket, a total of eighty-eight miles. His relaxed but alert posture in Stubbs' painting suggests this strength and expertise.

Although the human element was often subsidiary to the animal in his work, Stubbs' talent as a painter of men and women has recently begun to be reappraised. The image of Pratt here is a fine piece of human portraiture, as is another work by Stubbs in the Fitzwilliam, showing Joseph Smyth Esq. on a dapple grey horse, right [PD.95-1992].

John Pratt's mount is Gimcrack (b. 1760), one of the most celebrated thoroughbreds of the day. He was small for a racehorse, but renowned for his stamina and endurance. We can see in the sheen of his coat, with its suggestion of the underlying muscles, the brilliant understanding that Stubbs had of equine anatomy. Though Pratt is clearly in control of the horse, there are suggestions of Gimcrack's great power in motion – his small head has moved forward enough to tauten the reins, his rear left hoof seems to tap the ground with a faint impatience. This painting may commemorate Gimcrack's first victory at Newmarket, on 9 April 1765.

The extent of Stubbs' achievement in depicting horses can be seen when we compare his work with another slightly earlier painting of racehorses in the Fitzwilliam, left [PD.1-1979], A Race on the Beacon Course at Newmarket, by John Wootton. Despite the formality of the pose, there is more life in Stubbs' standing Gimcrack than in any of Wootton's cantering hobby-horses.

Stubbs painted other animals: the Fitzwilliam owns a charming small portrait by him, Isabella Salstonstall as Una in Spenser's 'Faerie Queene' [PD.45-1971], in which a pale, bright-eyed young lady sits musing in a glade. A lion stands at her feet, a white mule behind her. This is painted in enamel on ceramic, the product of an experimental collaboration with the potter Josiah Wedgwood.

Gimcrack, foaled in 1760, was one of the most successful horses of his day. In his seven-year career he won 26 of the 36 races in which he competed. He was small for a racehorse, standing at 14 hands high about 4 feet 9 inches) and he started racing relatively late in life, as a four-year-old. But he was well loved by the race-going public, and renowned for his grit and bravery. It is said that in 1766 he ran twenty-two miles in an hour when owned by a Frenchman, Count Laraguais.

In 1767, two years after this painting was made, a club for racing enthusiasts called 'The Ancient Fraternitie of Gimcracks, aka The Gimcrack Club' was formed. And in 1846, the Gimcrack Stakes, a race at York, was established in the horse's memory. It is run to this day, and the owner of the winning horse still gives a speech to members of the Gimcrack Club.

The Sport of Kings

It is not known exactly when horse-racing began in England. There is evidence that horses had been domesticated in the country by 2000 BCE, and they may well have been raced then. Certainly, after the Roman occupation in 43 CE, organised racing was taking place at York and Colchester. In the twelfth century the crusading king Richard I brought back fine stallions from the East, and during the fifteenth and sixteenth centuries the sport became increasingly popular.

In the early seventeenth century King James I, an enthusiastic but reputedly incompetent horseman, built a palace at Newmarket in Suffolk to house the court during the many weeks he spent there during the racing season. As the flat expanse visible behind Gimcrack in Stubbs' painting suggests, Newmarket Heath was ideal for running over distance. The first recorded race took place there in 1622, although the course was not officially opened until 1636, during the reign of Charles I.

In England the sport survived Puritanism, Oliver Cromwell and the Republic, and when the monarchy was restored in 1660, it became more popular and better patronised than ever. The new King Charles II was passionate about the turf, and was himself an excellent rider. He established an annual race, The Town Plate, in 1666 – the first horserace to have its own set of rules. Charles himself rode to victory in the race in 1671.

The eighteenth century saw a transformation of the sport in Britain. Horse-racing retained its connections with royalty and the aristocracy, but at the same time it was opened up to a much wider public. Indeed it has been said that 'race-courses were perhaps the greatest force for democracy in Georgian England'.

John Pratt, shown here mounted upon Gimcrack, and Gimcrack's owner, William Wildman, are two examples of men who benefited from this democratisation. Wildman was a tradesman, a successful Smithfield butcher, who had amassed a large enough fortune to own and maintain his own thoroughbreds. Pratt was the first man 'of plebeian origin' to become a full member of the Jockey Club, founded in 1752 – an institution founded to apply rules and regulations to racing.

Every modern thoroughbred (that is a horse bred specifically for racing) can trace its ancestry back to three stallions foaled between 1680 and 1724 and imported to England: the Byerley Turk, the Darley Arabian and the Godolphin Arabian. It is to this last horse, foaled in about 1724, that Gimcrack could trace his ancestry.

From the Abbott, Fairhaven, Gow, Jones, Perceval, Webb and University Purchase Funds after a public appeal through the Friends of the Fitzwilliam with subscriptions led by their Majesties the Queen and Queen Elizabeth, the Queen Mother and contributions from the National Heritage Memorial Fund, the Victoria and Albert Museum Grant-in-Aid, the National Art Collections Fund, the Pilgrim Trust and the British Sporting Art Trust, through Michael Tollemache. 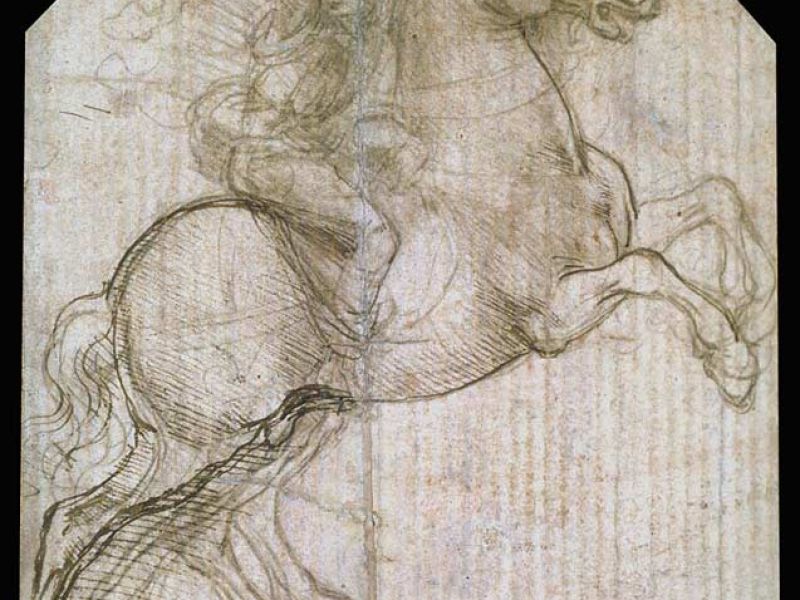 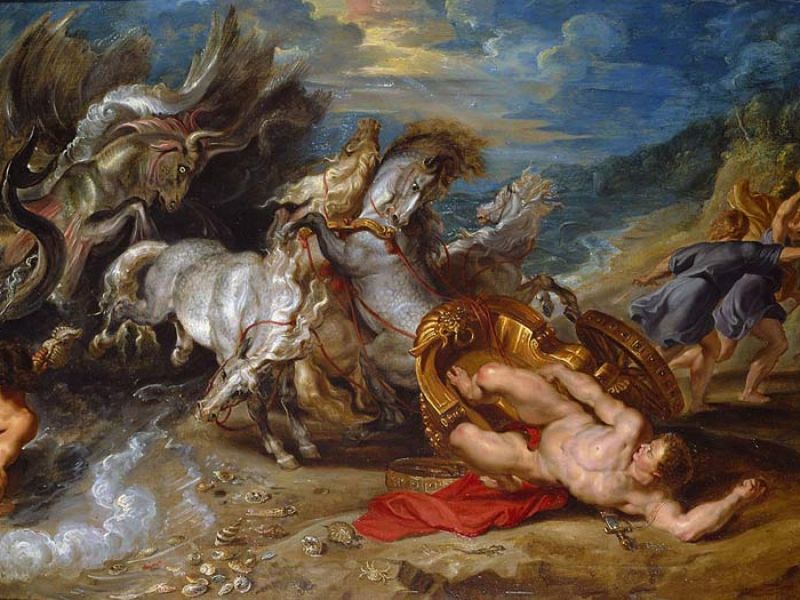 The Knight, Death and the Devil A Race on the Round Course at Newmarket - Art print

Gimcrack with John Pratt up on Newmarket Heath, c.1765 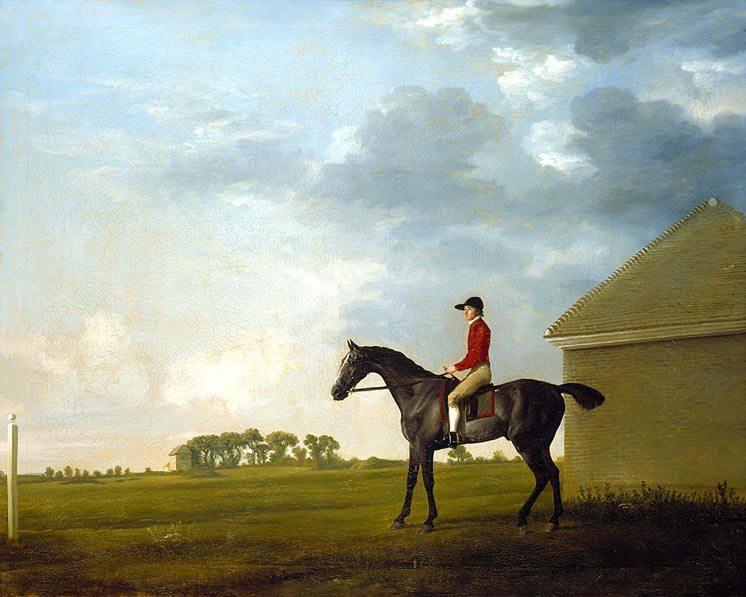