This painting, which was exhibited at the Royal Academy in London in 1865, vividly dramatises Victorian anxieties about gambling, especially among young women. The word 'Homburg' inscribed on the back of the canvas suggests that the action takes place at one of the gaming rooms in that German spa town, which had since the 1840s attracted a wealthy and cosmopolitan clientele.

A young woman sits disconsolately outside in the evening gloom. Flanked by darkness, she is herself starkly illuminated by the white light of the moon. Half of her face is unnaturally pallid: the other half is cast into darkness. Her clothes are rich and fashionable, but an empty purse dangles from her right hand and a torn gaming card lies at her feet. These details reveal the cause of her distress: she has lost all her money on the tables seen through the window behind her.

Elmore has created an impressive sense of depth within the painting, and the stillness and pallor of the moonlit foreground contrasts with the garish bustle behind the young woman. The red wallpaper of the gaming room is lit by a chandelier and candles, which are reflected in gilt mirrors around the walls. A crowd of people lean over a table, as absorbed in their sport as the woman in the foreground is in her sorrow. At the upper left of the canvas, we glimpse another room through an archway, where more lights shine, and more holidaymakers place their bets.

Connecting this busy interior to the young woman is the second major player in the drama. A shadowy young man, illuminated neither by the lights of the room in which he stands nor the moonlit night into which he leans, addresses her from behind. Light falls only upon his right hand which fiddles with a bandage wrapped around his left. He is not, we are to imagine, the kind of company a woman in this position ought to be keeping.

The imperfections of the relationship between these two are emphasised by the seemingly happy couple who face one another in the middle distance.

Next to the woman, as the anonymous poet in Punch pointed out, there are two flowers: a white lily – the symbol of purity for generations of artists – and a purple passion flower. These embody the choice faced by the unfortunate gambler: does she retain her virtue and face the consequences of her new found poverty, or does she earn the money she needs to repay her debts in the arms of the young man?

Elmore leaves the question brilliantly unresolved. His protagonist is truly 'on the brink': her future, and even her life, hang in the balance – for the path from seduction to prostitution to suicide was a matter of deep concern to Victorian moralists.

The Friends of the Fitzwilliam Museum in memory of Dr A.N.L. Munby, with a contribution from the Victoria and Albert Museum Grant-in-Aid. 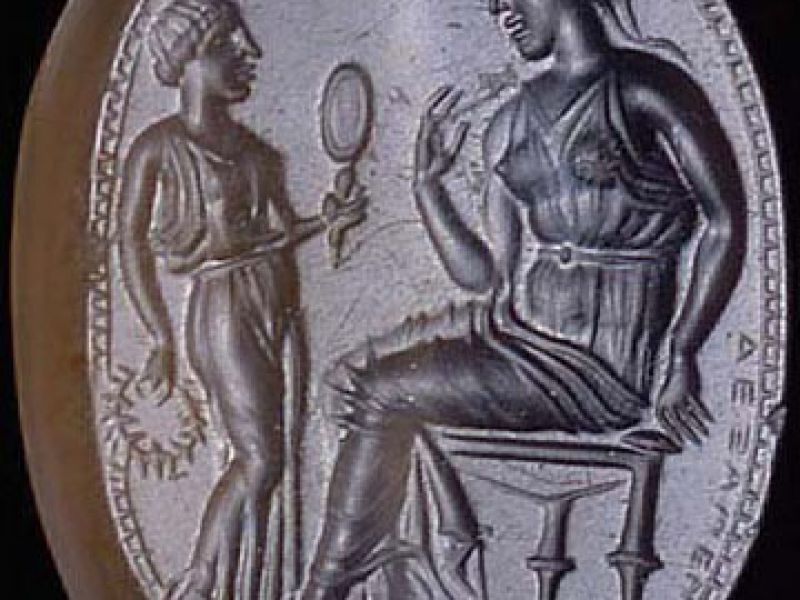 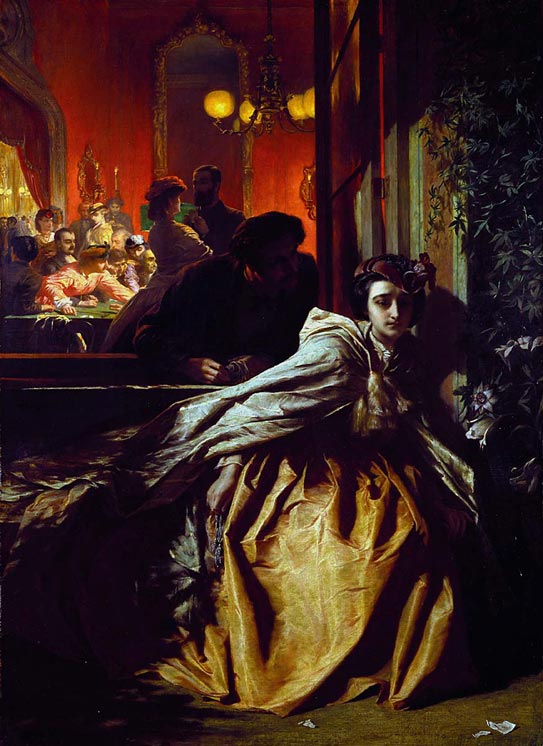