Coin of the Moment

The earliest awards for gallantry and bravery were created for military and naval recipients, and this practice grew considerably in the reign of Queen Victoria (1837-1901), including most famously the creation of the Victoria Cross during the Crimean War. There was however an understandable feeling that many civilian actions deserved just as much of a reward for bravery and gallantry as did their military counterparts, and it was in this spirit that in 1855 the Board of Trade created the Sea Gallantry Medal. The reverse design was the work of Benjamin Wyon, Chief Engraver of the Seals of the Crown, and was paired with the bust of Queen Victoria by his cousin William Wyon.

Bravery at Sea: the Ramsgate "Life-Boat"

One of the more famous episodes for which Sea Gallantry Medals were awarded was that which relates to the Museum's example, and as with many such awards, the story involved is worth recounting in full, not least to remind the reader that such actions are rarely the work of an individual alone, but groups working together.

The story is as follows. In the very early morning of 5 January 1881, a trading vessel by the name of Indian Chief, four days out of Middlesborough bound for Yokohama, came to terrible grief on the Long Sand in the English Channel, some way off Ramsgate. The account of her First Mate, William Meldrum Lloyd, was reported in the Daily Telegraph on 11 January. He told how the attempt to get the ship safely laid over, when the storm in which she would be wrecked blew up, had gone awry, and how before sail could be dropped the vessel drifted heavily aground. Knowing that the impact would have damaged the vessel and that there was no hope of refloating, the crew sent up flares and rockets, which were answered by two nearby lightships, but while attempts were made to reach the ship, by a passing smack and by three lifeboats, then a relatively new institution, the gale prevented any of them getting to the beached and broken ship.

The crew attempted to launch their boats but in the heavy seas three were immediately swamped, taking two crewmen with them, and that escape route was thereafter abandoned. The remaining crew were able to shelter in their cabins during most of the day while the gale continued, but the working of the tides and the progressive breaking-up of the ship meant that by the late afternoon they were awash. As the night came on the crew, exhausted, soaked and frozen, had to take to the rigging to avoid the waves, and more and more of the unlucky were swept away. The bitterest blow came when the mainmast, which had been rooted in the now-wrecked bottom of the ship, fell and took with it the mizzen-mast, where the ship's captain and all but eleven of the remaining crew had taken refuge. Lashed to the mast to avoid being swept away, they could not free themselves and drowned to a man. 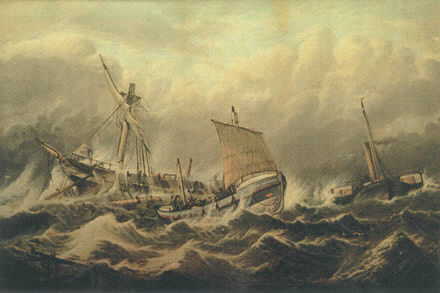 Only in the first light of the morning of 6 January were the survivors' hopes raised by the sight of smoke. This came from the Ramsgate paddle-steamer tug, the Vulcan, which had been out since midday of 5 January in the same storm, attempting to find the Indian Chief, with the sail-driven lifeboat Bedford from the same port tied astern. With the wreck now sighted the lifeboat closed in under sail, despite the still-heavy seas, and managed to take off the eleven survivors. Seventeen of the drowned men were still lashed to the wreckage of the masts, including the captain, whose body reportedly retained so fixed a gaze on the horizon that the lifeboat crew nearly took him on board thinking him still alive. The lifeboat crew had endured as vicious a battering from the storm as the men of the Indian Chief, but their intact and self-righting vessel had kept them, if not warm and dry, at least alive and sound.

Harry Meader and his Medal

By the time that the rescuers returned to Ramsgate on the afternoon of 6 January the wreck had already become newsworthy, and the crews of all three vessels received a grand welcome and were, thankfully for us, interviewed by numerous journalists. It was for this reason no doubt that the Board of Trade determined on the award of medals for the rescue, but it is not known to how many of those involved they were granted. One of the recipients, however, was Harry Meader, and as he was one of the regular crew of the lifeboat it seems likely that at least that vessel's crew all received the medal. In the picture above, kindly supplied by the Ramsgate Maritime Museum, Meader stands third from the left, moustachioed and looking to the viewer's right. The records of the Royal National Lifeboat Institution make it clear that Meader and his fellow-crewmen, as well as the crew of the Vulcan, were also awarded the Silver Medal of the RNLI, while the lifeboat's captain, Charles Fish, was awarded the Medal in gold. The local fame of the rescuers from both vessels also led to them being awarded a medal struck by private subscription, in addition to the RNLI and Board of Trade medals (the former of which were awarded only to the lifeboatmen, and not to the crew of the tugboat that kept them at sea). By happenstance, the example of this medal awarded to Harry Meader is now in the possession of the Ramsgate Maritime Museum, who have kindly supplied this image of the medal from its sale as part of the collection of D. J. Denham at Sotheby's, 23 June 1971. 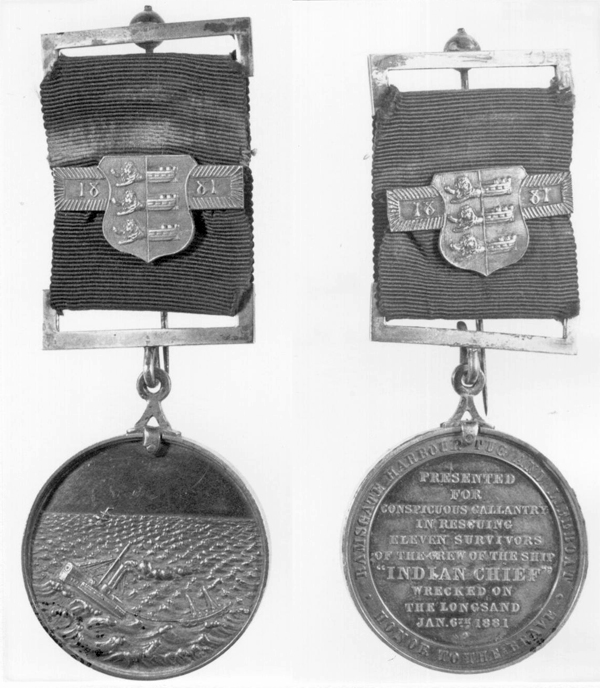 It seems that this local renown was not sufficient for the lifeboatmen to dine out on for life, however, as in 1914 the East Kent Times raised an appeal to fund a pension for the surviving rescuers, claiming that:

... age and the hardships of their calling have left their mark on the weather-beaten veterans. They are incapable of the arduous work of their younger days, and there is no doubt that in some cases a weekly grant would be a welcome addition to their slender resources.
All the survivors are nearly seventy years of age—one or two over—and between them they have helped to save over a thousand lives."

With the article in the East Kent Times was published a picture of Harry Meader, with all three of his medals including what is now the Fitzwilliam's piece proudly displayed on his chest. It is therefore clear that he still owned the medal in old age, and it is likely that it was disposed of by his heirs. 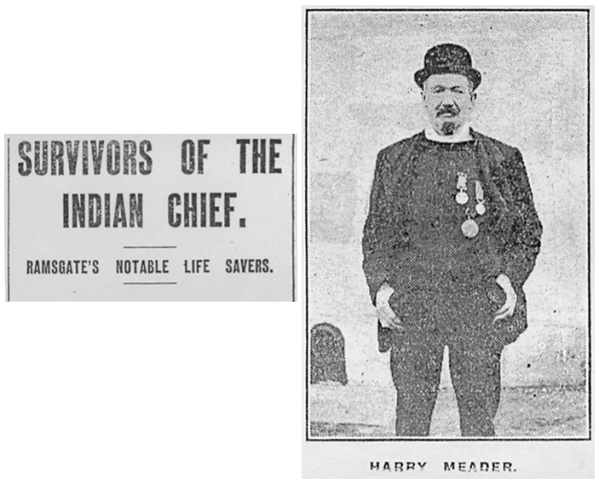 It is unusual to be able to tell the story behind a medal in the Fitzwilliam's collection in so much detail, and this makes the human interest of it all the greater. The piece arrived in the Fitzwilliam in early 2007, as part of a bequest made by its previous owner, John McKee, to the Art Fund, which allowed several museums to make selections from his collection. This is one of several of Mr McKee's pieces that have thus found a home with the Fitzwilliam Museum. 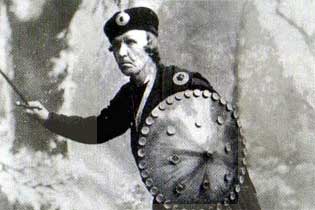 Such was the renown that this early lifeboat rescue attained at the time that it had a surprising result from the other end of Britain, where the infamous Dundee poet and tragedian, William McGonagall, or to give him the full title that he used, Sir William Topaz McGonagall, Knight of the White Elephant, Burmah, was inspired by the news to write one of his much-derided odes, 'The Wreck of the "Indian Chief"'. Despite such praise as:

'Charles Tait, the coxswain of the lifeboat, was a skilful boatman,
And the bravery he and his crew displayed was really grand;
For his men were hardy and a very heroic set,
And for bravery their equals it would be hard to get.

'But, thank God, out of twenty-nine eleven were saved,
Owing to the way the lifeboatmen behaved;
And when they landed with the eleven wreckers at Ramsgate,
The people's joy was very great.'

... the reader may be forgiven for thinking that this medal is a more telling tribute to the bravery of Meader and his colleagues.