Coin of the Moment 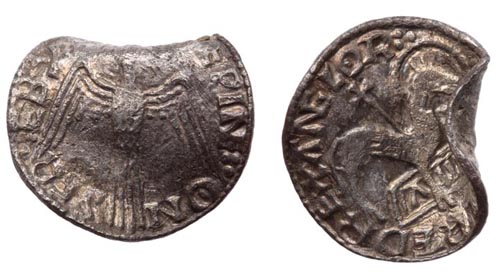 In the 970s and after England developed a remarkable monetary system characterised by standardised coin-types naming king, mint-place and individual maker (‘moneyer’) which were issued at up to seventy places across the kingdom, from York to Exeter and Dover. Every few years these coins would be brought in and replaced with a new type. Thanks to payments of tribute to the Vikings who menaced England during the reign of Æthelred, tens of thousands of silver pennies of most of these types have survived in hoards from modern Scandinavia.

Yet one particularly striking and historically important type remains poorly represented among them: the famous Agnus Dei (Latin for Lamb of God) type. Only 21 specimens have been discovered, all but four of them in Scandinavia or the Baltic. One of the latest to come to light was found near Epping, Essex, in 2008. It was subsequently bought for the Fitzwilliam Museum (accession number CM.1-2009).

Uniquely for the succession of types running from Edgar to Harold II in 1066, the Agnus Dei coinage dispenses with a representation of the king on the obverse and with the usual cross on the reverse. In their place, one finds a representation of the Lamb of God and of the Holy Dove. These images find extensive parallels among manuscript illuminations, sculpture and metalwork of the period, and demonstrate that the designers of coins were very much in touch with the artistic mainstream, and therefore presumably with the deep resonances which attached to these images. Both emphasise the peace-bringing power of Christ and the Holy Spirit: a message which chimes perfectly with the desperate efforts mounted by King Æthelred at the time of a great Viking invasion in 1009 – a date which is also indicated by independent numismatic criteria. The attack of Thorkel the Tall and his army beginning in the late summer of that year presented a genuine crisis for the English, whose own forces proved unable to co-operate or pin down their opponents in battle. Under these circumstances, the rulers of the English placed their hopes in God. A tract stipulating the donation of alms, fasting and prayer until conditions improved was issued in the run-up to Michaelmas (29 September) 1009, while the defenders of the southeast – where the force of the attack fell – braced themselves against the foe.

It is very likely that the Agnus Dei coinage was produced as a complement to this broader appeal for divine help in late summer and autumn 1009. Although scarce, the surviving coins were clearly a carefully conceived venture, innovative in fine detail as well as their striking iconography. They are also noticeably heavier than the immediately preceding coin-type, which indicates that they probably belong at the head of a new type (coins of which would typically become lighter over time). Issuing a fresh coin-type meant more than inconvenience for the populace or a fundraising scheme for the king and his agents: it was a key defence against forgery and, in the eyes of contemporary commentators, an assertion of good order comparable to the prevention of other serious crimes. In other words, it was precisely the sort of endeavour that the circumstances of 1009 called for. The Agnus Dei coinage thus constitutes a very special inception for a new coinage; one which was closely tied to the exceptional conditions of the time.

The Fitzwilliam’s specimen of this coinage was made at Salisbury in Wiltshire by a man named Sæwine. The pattern of production visible from surviving specimens gives further clues to the unusual way in which the Agnus Dei coinage was issued. None of the leading mint-towns (Lincoln, London, Winchester and York) of England are represented; rather, minting was restricted to just nine relatively minor places, stretching in an arc from Salisbury in Wessex through a cluster of mints in western England at Stafford and Hereford, to another group in the east midlands. These nine places may represent the only ones to receive and use dies (stamps) for the new issue during its short period of currency, although there is some uncertainty about how this process was organised. The absence of Agnus Dei pennies from the southeast may be a result of the impact wrought by the Viking invasion.

This penny was found already with the bend which can be seen in the illustrations above. Flattening it out was deemed too risky, and also as perhaps taking away from part of the coin’s history. It is very likely that it was bent deliberately by an eleventh-century user, possibly as a small votive offering: a custom which became widespread later in the Middle Ages.

The coin was recently featured on BBC 2’s Vikings with Neil Oliver.